By far, one of the most popular Gillette Double Edge Safety Razors is the $1.95 Adjustable "Fatboy". While there is a lot of confusion around this model, one of the variations was the "Red Dot".

The “Red Dot” (so dubbed for the red dot to mark the adjustment setting) was one of several test market razors built by Gillette back in the 1950’s when they were developing the 195 adjustable razor that we affectionately refer to as the “Fat Boy”. As far as limited production razors go, this one is seen a little more often than the model that has the adjustment dial on the bottom, and it is fairly well finished with a solid nickel plating job and a case.

These razors were made for two main reasons - take the "Toggle" Adjustable platform and bring the price point down, in order to sell more. Gillette also used them to see if they could be sold at a slightly higher price point of $2.49 rather than what they settled on with the famous $1.95 Adjustable "Fatboy". 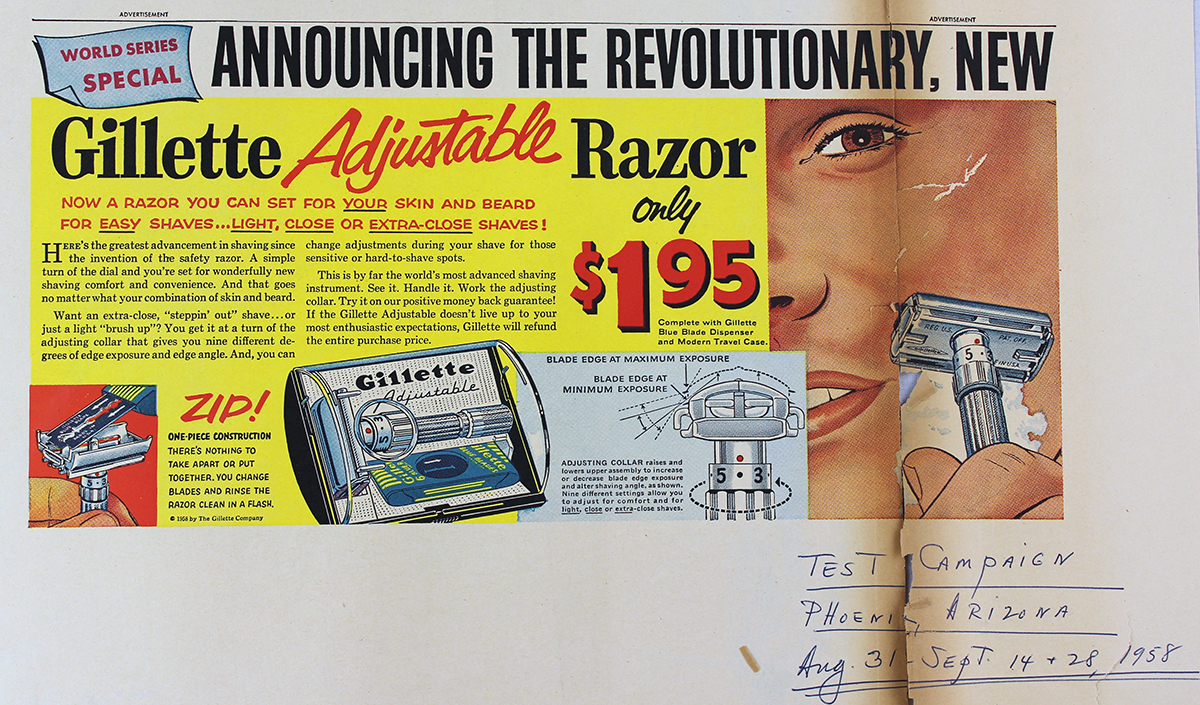 These two ads are the same except price and where they were published- the $2.49 price point in New Mexico while the $1.95 model in Arizona.

From the outside, it may look the same, but looks can be deceiving. 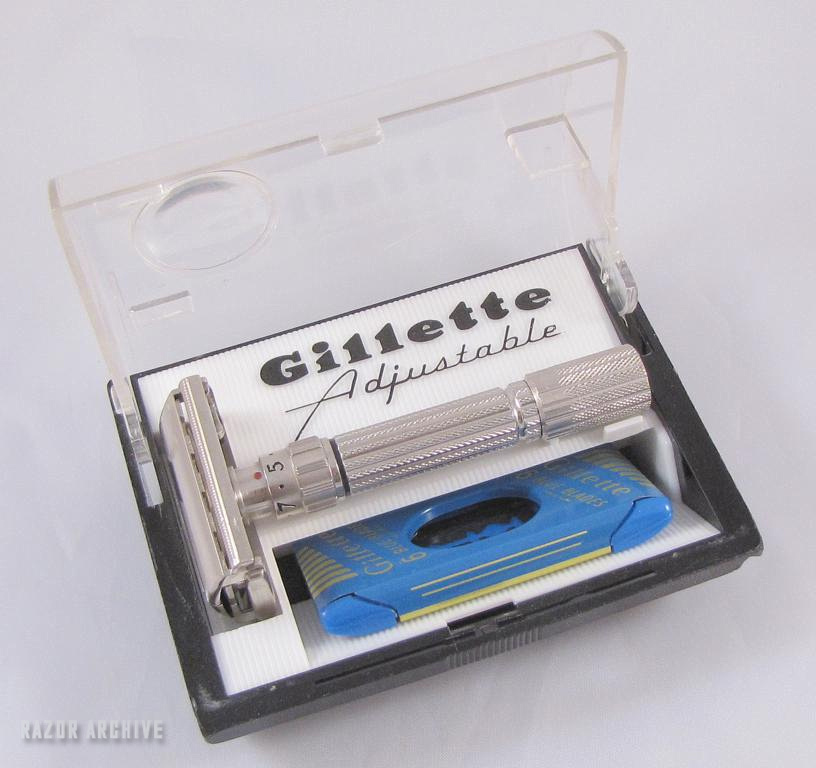 The Red Dot weighs 3.0 ounces, which is slightly more than the production Fat Boy’s 2.7 ounces, and it has a little longer handle. 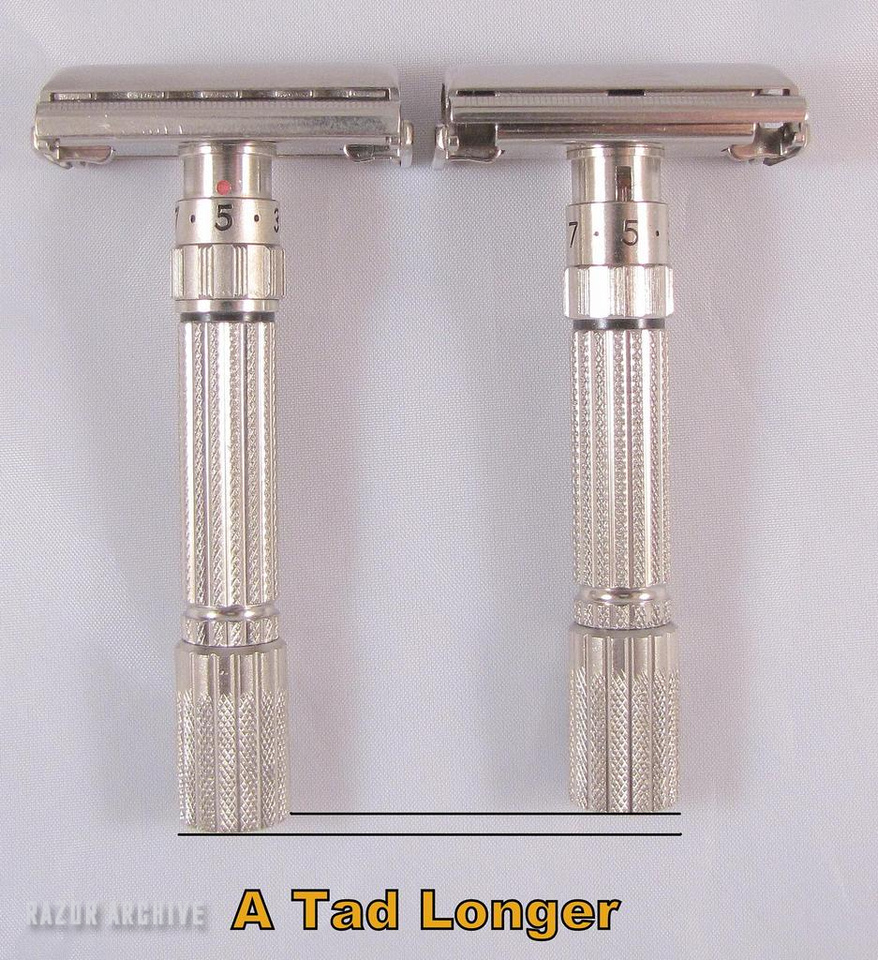 Also has a thicker, differently shaped blade tray and slightly longer guard bars. The adjustment dial is a night and day difference as it is free of the sloppiness of the production Fat Boy with a tighter and more precise feel to it. The adjustment is also different in that the entire blade tray moves on the Red Dot, whereas only the four bars move on the Fat Boy. 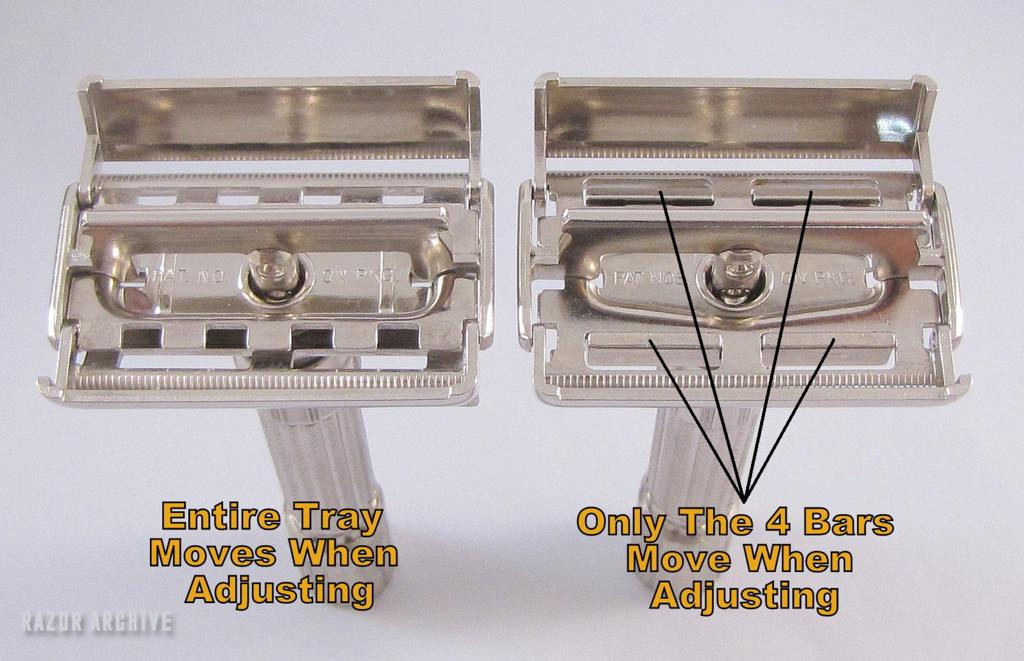 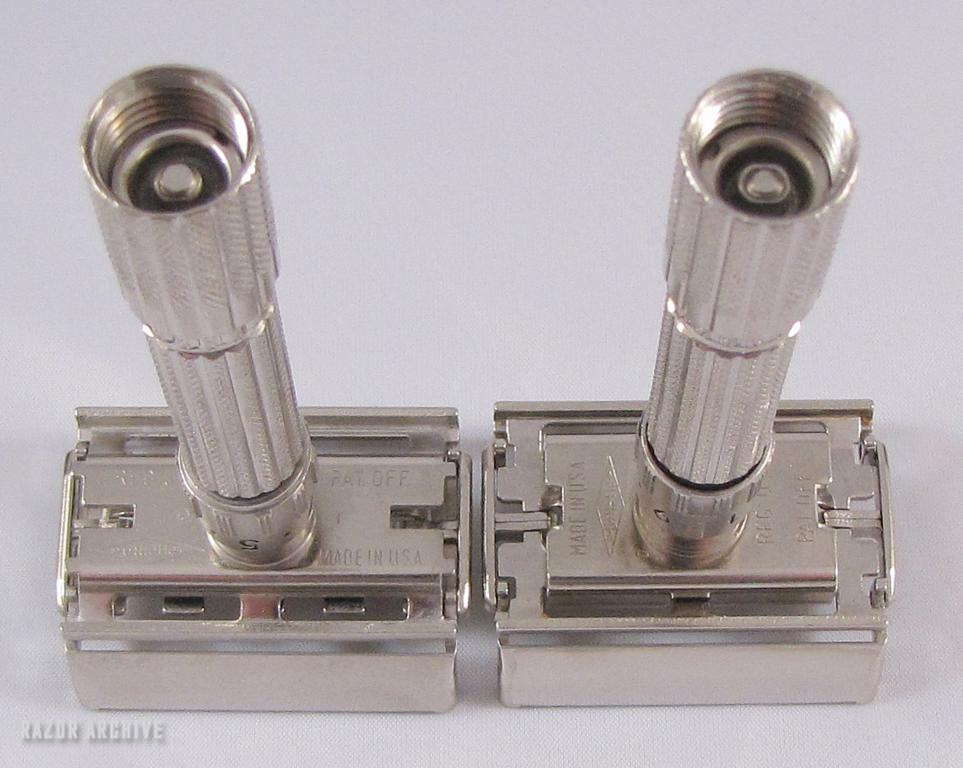 And unlike the Fat Boy, the Red Dot does not have a "lock down" turn, it just tightens down in the same manner as a Super Speed. All-in-all, the Red Dot has a sturdier and more precise build quality, and I always kind of thought that a gold plated version is what the adjustable Executive should have been. The case for the Red Dot is also a little larger and more rounded than that of the Fat Boy.

Other than its basic appearance and function, it really doesn't have that much in common with the production Fat Boy -- it’s actually more like a Toggle with a twist-to-open (TTO) knob. 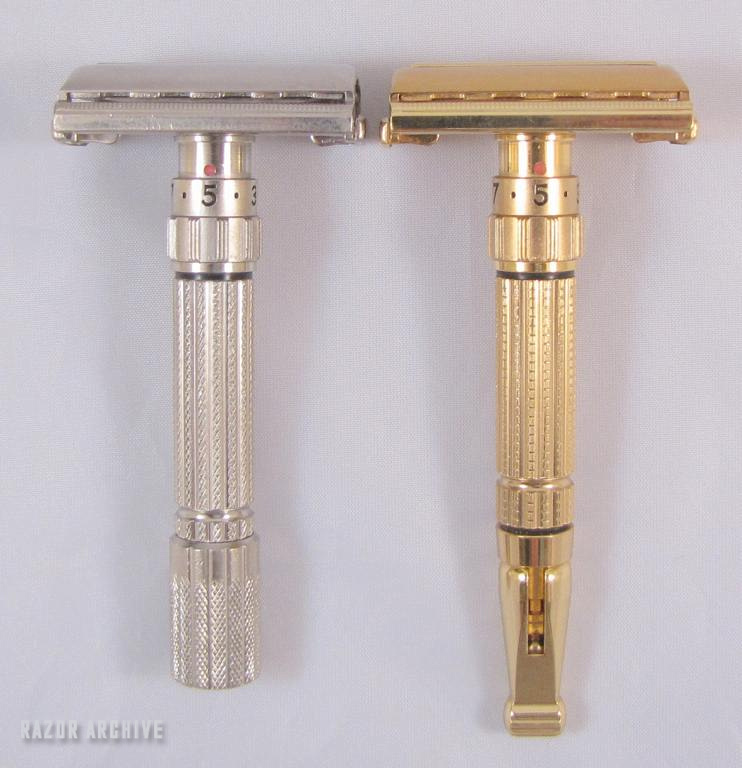 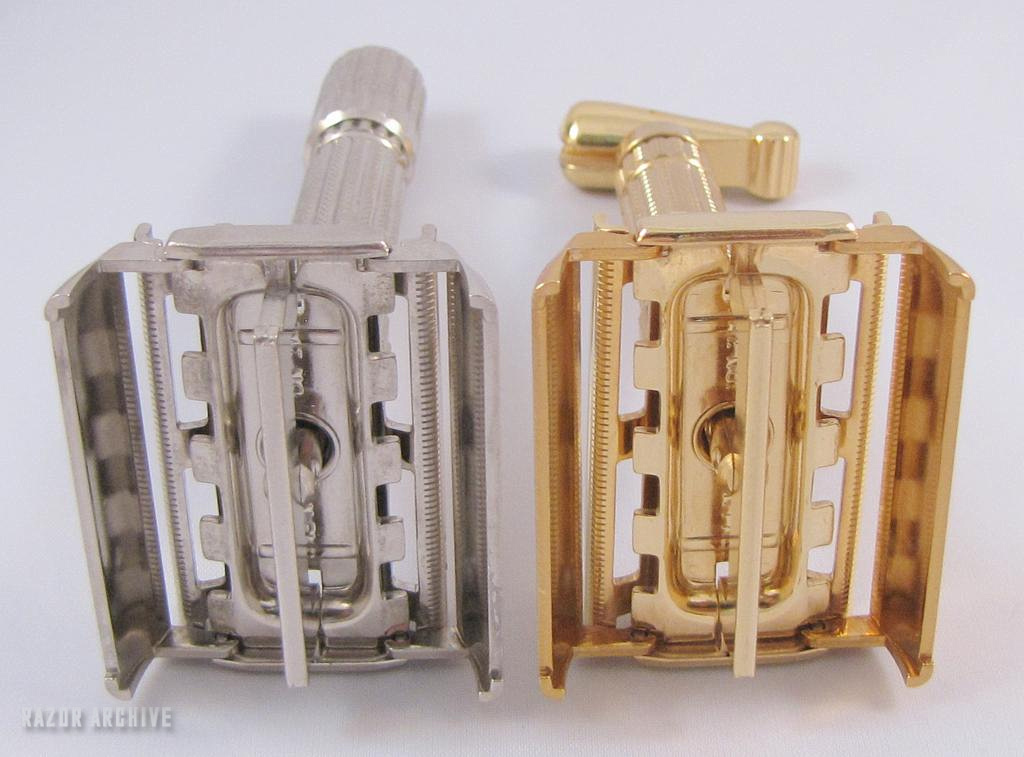 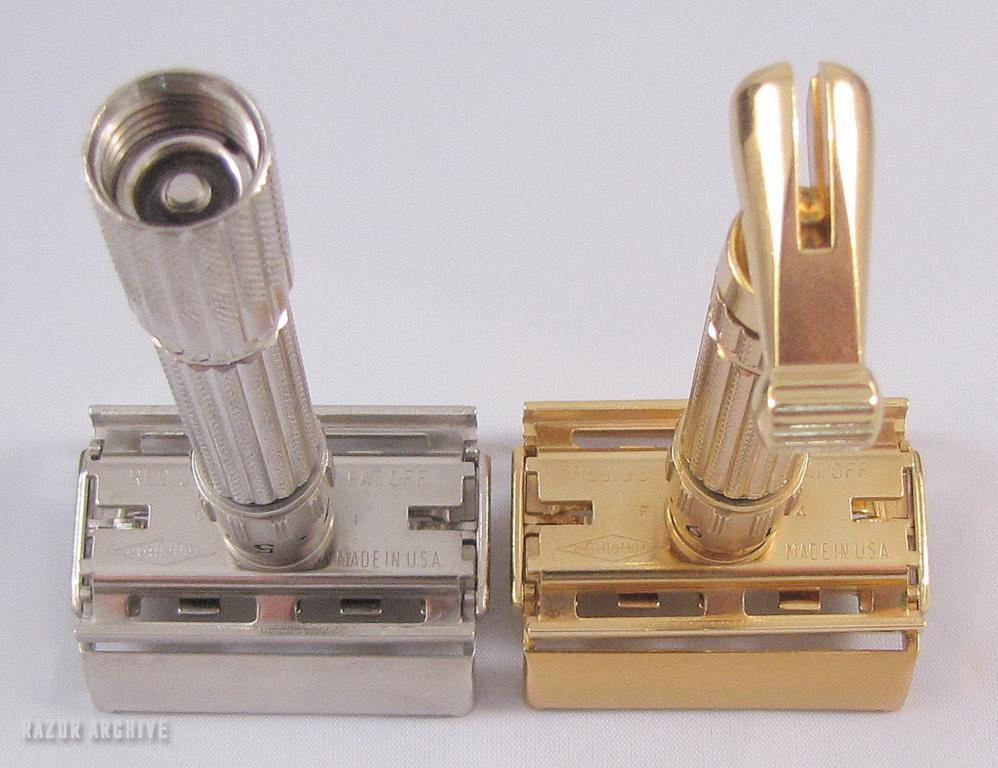 We often get asked if we can work on these razors- the answer is YES.

Here's a recent razor that came in and we took photos of a typical Tune-Up Service operation.

STEP 1 - Take off bottom plate and remove split ring. DO NOT LOSE!

STEP 2 - Unscrew "rider" inner barrel - this is what the T - Bar "rides" up and down on, performing the Twist To Open (TTO) mechanism.

STEP 3 - We use a specialized vice to carefully separate the handle from the head without damaging the components. The razor is now fully disassembled.

STEP 4 - All parts are now lightly brushed and polished - bringing the factory nickel finish to a luster.

STEP 5 - All parts are ultrasonically cleaned and rinsed of compounds. This also performs sterilization.

STEP 6 - The black "ring" is now masked and air brushed, baked at low temp for hardness.

STEP 7 - This customers razor had a blade adjustment tray that was loose on the connecting shaft. We brazed it on with silver solder.

STEP 8 - We now press the top assembly back together and add back the components from the bottom TTO mechanism.

STEP 9 - Blade gap is checked, and adjustments of the guard /assembly made. Finally the "Red Dot" is filled in, the mechanism is oiled and our Tune Up Service is complete!